Rwanda has seen their efforts to use technological advancements bearing them fruits that any African country have for some decades been striving to attain. After reeling from 1994 genocide that licked away almost 1 000 000 lives belonging to the Tutsi, Twa and , according to World Bank in 2011, Rwanda ranked 58 out of 183 countries in the Ease Of Doing Business survey by which World Bank measures the intricacies of running a business in differrent countries.

Since assuming power after serving as the Rwandan vice President between 1994-2000, President Paul Kagame his intentions of implementing business friendly policies a no secret. Rwanda policies are that of improving technology and communications to pave a way for entrepreneurial creativity and sustainable growth. In October of 2019, the East African country launched the first ever smartphone to be made in Africa and this was preceded by 6 months agreement between software development firm Andela and Rwanda governmen to offer free training to 500 Rwandans mid 2018.

The country incepted Information and Communication Technology which is a central engine to driving Rwanda’s transformation to a knowledge based economy, hence Rwanda remains one of the fastest growing African countries in ICT and there are several avenues for growth for the ICT sectors -from e-commerce and e-services, mobile technologies, applications development and automation to becoming a regional center for the training of top quality ICT professionals and research.

Smart card ticketing system developed by AC Group in December 2015 which allows to electronically pay for their busa fares through mobile phone or point of sale devices operated by vendors at bus terminals and barely 6 months after its launch, the company founder says they have received demands from other country to introduce the system. Furthermore, Tracnet uses mobile phones to improve communication between remote HIV/AIDS clinics and administrative centres. The system allow clinics to send HIV/AIDS patient information from mobile phones with SMS text messaging to a central database using a standard Motorola phone with a downloadable application. Using TRACnet, health care workers can track and follow up with HIV patients in remote areas with no electricity and little infrastructure. Clinics can also receive the results of laboratory tests and drug=recall alerts on their mobile phones. They can also send health alerts and inventory counts of antiretroviral drugs, as well as download treatment guidelines and training materials. The system is designed to increase accountability among health care workers through an electronic record that is created by every input into the system. TRACnet also facilitates better communication from clinic to clinic as well as from individual clinics to the Health Ministry in Kigali.

Few months following the signing of Andel deal, Rwanda brought yet another big fish in partnering with Alibaba to mark inception of the first ever electronic global trade platform in Africa. Back in 2015, the government of Rwanda approved a New Investment Code whose aim is to entice more FDI. 2018 saw the implementation and passing of visa-on-arrival for all Africans citizens.

What drives them ahead of the entire pack?

The recent reports shows that the unemployment rate in one the fastest growing economy in the world was 16% and trading economics is expecting the unemployment rate to come slightly to sit at 15.305 in the next quarter. The youth joblessness rate is hovering around 20.60% with the laborforce participation rate at 52.30%. Rwanda’s large industries include energy, agriculture, trade and hospitality and financial services. In 2019, the London Stock Exchange released their report showing that 14 Rwandan companies are amongst the fastest growing companies and most dynamic business in Africa. Those companies were Charis UAS, Bank Of Kigali, Africa Improved Foods, Mobisol Rwanda, AC Group, Axiom Networks.

Foreign Direct Investment (FDI) surged by more $305 million in 2018 and averaged $234 million from 2009 to 2018. The highest point ever reached was $341 million in 2014 anfd record low of $118 million in 2009. An increase in 2018 was bouyed by strengthening of diplomatic relations with its current approach to visa-openness, economic control and social progress. Investments are mainly targeting the sectors of mining, construction and real estate, infrastructure and information and communication technologies. The main investors in Rwanda are Portugal, UK, India ans UAE

Exports rose to $82.34 million in October 2019 from $72.70 million of September 2019. In similar but contrast fashion, the imports also grew to $308.04 from $257.86 million during the same period pushing the trade balance further into deficit of -$225.70 million. Most of the improvements discussed here could be attributed to technological advances which added some impetus on their economic strides in past two decade. the truth is Rwanda is not an overnight wonder of the African development, it some some yeaars and accurate planning and time frame and most importantly, deviation from the corruption, autocracy, civil war which at some point left the East African country believed to be debris but now is a bird in the process of phoenixing off its ashes.

Stats SA’s Gross domestic product (GDP) release for the fourth quarter of 2020 (October–December) concludes the series for the y... 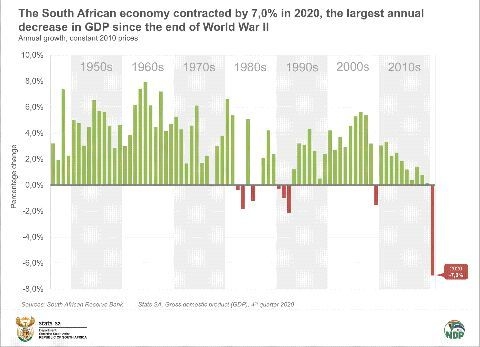